One state, many worlds

From the majestic rocks of the Deccan Plateau to the Arabian Sea coastline, Karnataka is a land of lush tropical forests, thundering 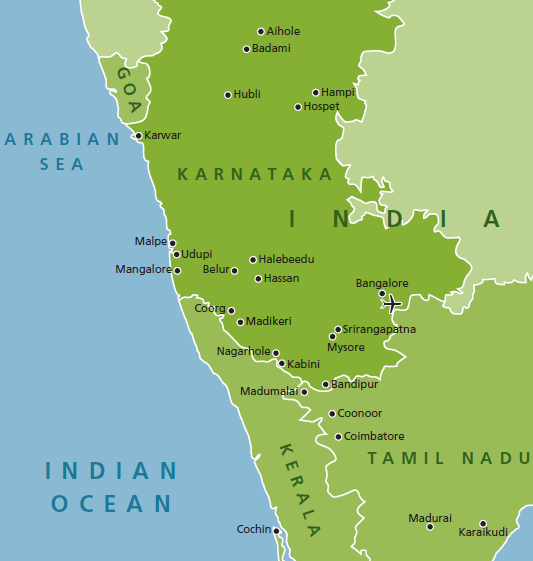 waterfalls and unspoilt beaches lapped by clear blue sea.
Man’s influence further enriches the appeal of this marvellous Indian state with breathtaking hill-stations, wildlife sanctuaries, coffee plantations, adventure activities and colourful art forms and festivals. And nowhere else in India can one find such a profusion of monuments – it is no wonder Karnataka has been called the cradle of stone architecture.

The capital of Karnataka State is one of India’s most charming cities. Aptly named ‘the Garden City’, it boasts of an amazing number of flowering trees and parks. With splendid pink cassias and golden acacias blooming, with jacarandas flowering in purple majesty and the gulmohars lighting the roads with their flame-orange brilliance, Bangalore is a sheer delight to simply wander around in.

mals and  birds and to Kesava Temple, a beautiful masterpiece of architecture from the Hoysala period, a great period in south Indian history.

Hassan
The town of Hassan is associated with the Hoysala dynasty which lasted from the 11th until the 14th century.
Madikeri
This quaint hill town in the Western Ghats has a lot to offer to the tourist. Undulating streets look out to misty hills, lush forests, acres and acres of tea and coffee plantation, orange groves and breathtaking views, making Madikeri an unforgettable holiday destination.

Coorg (also known as Kodagu) lies on the eastern slopes of the Western Ghats, a district of wooded hills and deep valleys. Dubbed the ‘Scotland of India’ it is a beautiful place with green, verdant undulating hills and coffee, orange and spice plantations. Part of the south of the region lies in the Nagarahole
National Park, a complex of wildlife sanctuaries which stretches into the neighbouring states of Tamil Nadu and Kerala.
Halebeedu
The capital of the Hoysala dynasty was at Dwarasamudra, the ruins of which are still to be seen scattered round the town of Halebeedu.

Hampi
Once boasting fabulous grandeur, wealth and riches known far beyond the shores of India, Hampi was the seat of the 14th century Vijayanagar empire, the largest in post-Moghul India. Its destruction by Moghul invaders was sudden, shocking and absolute – they reduced the city to rubble amid scenes of savage massacre. Today the ruins of the city lie scattered over 26 sq km amidst giant boulders and vegetation, protected by
the tempestuous River Tungabhadra and rocky granite ridges. This UNESCO World Heritage Site, with its splendid remains of palaces and gateways of the broken city, tells a tale of man’s infinite talent and power of creativity, together with his capacity for senseless destruction.

Mysore
Situated in the southern part of the Deccan Plateau, Mysore District is an undulating tableland covered in parts by granite outcrops and fringed by verdant forests. From ancient times it has played a significant role in the history of South India. It is now a popular tourist destination, offering attractions ranging from exquisite temples, pilgrimage centres and scenic spots to the royal splendour of Mysore City, the cultural capital of the state.
Full of old world charm, the city boasts broad shady avenues, well laid out gardens, fine buildings and the fabulous Dasara Festival. Mysore Palace is a particular highlight – built in the Indo-Saracenic style with domes, turrets, arches and colonnades, it is a treasure trove of exquisite carvings and works of art from around the world. St. Philomena’s Church, the best Gothic-style church in South India, is also well worth a visit.

Srirangapatna
The fortified Island of Srirangapatna is the largest river Island in this region. A strong fortress town under the reign of Gangas of Talkad, it was home to the Summer Palace of Tippu Sultan who was killed in 1799 by Wellesley’s Red Coats. It features a multi-layered fort and wooden palace with beautiful murals, bastions and ancient temples, the Wellesley Bridge and the famed dungeons.