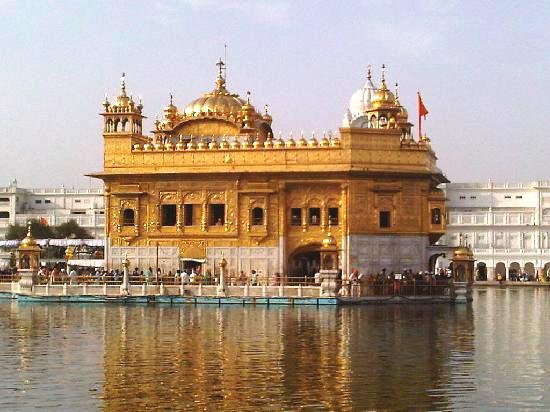 Punjab, the land of the five rivers, has an area of over 50,000 sq.kms., with a population of around 17M. The land is extremely fertile, making this area the granary of India. The people, who speak Punjabi, are largely successful farmers and capable of hard work under the most adverse conditions.

The most holy of Sikh shrines, the Golden Temple, is located in Amritsar, the largest city in the Punjab. It was founded 400 years ago by the fourth Sikh Guru, Ram Das, and his son the             fifth Guru, Arjun Dev, built the temple. In the 19th century the Sikh ruler Maharaja Ranjit Singh gilded the temple, rebuilding      parts of it in marble inlaid with precious stone. Several gurudwaras, or Sikh temples, are places of pilgrimage for they are associated with acts of the Sikh Gurus. Among them is Anandpur Sahib, not far from Chandigarh, where an enormous fair is held during the spring festival of Holi.

Attractive embroidered ‘jooties'(slip on shoes); phulkari embroidery on dresses, table and bed linen; and handcrafted wood items are some of the crafts of Punjab.

Amritsar and most cities of Punjab are well connected by air, rail and road.
The major cities offer a choice of good hotels, while the smaller towns have more modest accommodation.